“We see the light at the end of the tunnel. With two vaccines out with very impressive efficacies, we think we are going to see a more sustained shift back to investor interest in some of the sectors that have been very hard hit” 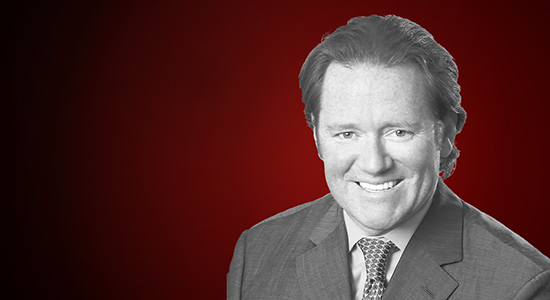 Neither red nor blue
Marc Ganzi is doing things differently at Colony Capital. Of course, there is the pivot to digital real estate, which is why he was named chief executive earlier this year. But it goes beyond that. As he shared in his keynote interview at last Tuesday’s PERE America virtual conference, Ganzi will not be following in the political footsteps of his predecessor Thomas Barrack, a long-time friend and fundraiser for the outgoing US president, Donald Trump. In recent years, Barrack’s support for the Trump administration has at times overshadowed his own business activities. Ganzi, on the other hand, told PEI Media’s real estate senior editor Jonathan Brasse how he saw no benefit to having such a close proximity to politics, and declaring that digital real estate was neither “red” nor “blue”, but “purple”. “The new administration at Colony Capital is politically neutral,” he told PERE’s virtual audience.

Crossing the lines
China’s enhanced debt controls have property owners seeking liquidity. Guangzhou-based developer R&F Group, which is reportedly in violation of the country’s ‘three red lines’, sold a 70 percent stake in the Greater Bay Area’s largest logistics park to Blackstone last week for $1.1 billion. The proceeds of that sale will be used to reduce the firm’s liabilities, PERE understands. The three red lines policy limits refinancing for developers that violate the following criteria: a ceiling of 70 percent liabilities to assets, a cap of 100 percent net debt to equity and a cash-to-short-term borrowing ratio of at least one. R&F Group has reportedly crossed all three thresholds (see Bloomberg Quint’s coverage here). The regulations were designed to protect China’s housing market. But the ramifications – and opportunities – are arising elsewhere.

Retail rescue
Major mall owners are still propping up struggling retailers. Last week, a bankruptcy court allowed Brookfield and Simon Property Group to acquire JC Penney for $1.75 billion in cash and assumed debt (see Reuters’ coverage here). In the near term, this rescue package avoids a co-tenancy stipulation that would allow for an exodus of smaller tenants upon the departure of an anchor such as JC Penney. In the longer run, Brookfield and Simon could reap the rewards of acquiring a valued brand for a distressed discount. But the latter only holds true if the department store chain can bounce back after the pandemic – no easy task, given the headwinds facing traditional retail. If the companies can reinvent the century-old department store for the 21st century, this investment will be a major coup for them. Otherwise, it will go down as a failed attempt to throw good money after bad.

Floating on Air(bnb)
Despite reduced revenue, Airbnb turned a $219 million profit during the third quarter, according to a prospectus filed with the SEC this week. The short-term home rental platform has long planned to go public – in fact, earlier this year, we outlined why it has a better shot at a flotation than other would-be real estate disruptors. What is noteworthy about the disclosure is that it demonstrates continued demand for travel lodging, even in the face of a pandemic.

Leading lenders
Banks and agencies account for the lion’s share of commercial real estate debt. But other groups are gaining ground.

Sneak preview
Retail has been one of the hardest-hit property types during the covid-19 crisis, but what will the sector look like in 10 years? Here are a few highlights from CBRE’s The Future of Retail report, focusing on the Asia-Pacific region:

Structural changes
The key to unlocking value in Europe’s hotel sector resides in the debt, according to Eric Assimakopoulos, founder of Europe-focused manager Revetas Capital. As he writes in a guest commentary, to be published later this week, the distress in the hotel sector will come mainly from broken credit structures. He, alongside other opportunistic managers, will hope to be in the mix of rescue capital providers via Revetas’s incoming Strategic Hospitality Investment Partners distressed hotels investment fund. “If debt providers look to a structured solution and management companies realign agreements, then there is a steady ship to invest in,” he writes.

At the summit
Last week’s PERE America conference was only the beginning. This week brings an even more robust slate of events with yesterday’s PERE Debt Forum and PERE Asia Week, which runs through Friday. Today and tomorrow, attendees can catch live events for the PERE Asia Summit, PERE Europe and PERE Debt and Finance. It is remarkable to have such a collection of global industry insight and networking opportunities in such a concentrated amount of time.

Today, our own Evelyn Lee led a thought-provoking panel on global opportunities for Asia Week while top editor Jonathan Brasse sat down with Norges Bank’s Karsten Kallevig for PERE Europe’s ‘fireside chat’. As this letter circulates, Real Estate Capital editor Daniel Cunningham is moderating a panel on real estate financing and the debt markets. Tomorrow, keynote interviews will bookend the day as our reporter Christie Ou interviews Christopher Heady, Blackstone’s chairman of Asia-Pacific and head of real estate Asia, in the morning, and Jonathan Brasse then sits down with Goodwin Gaw of Gaw Capital Partners in the evening.

If you miss any of these events live, have no fear. Attendees can view recordings of the panels through their respective event web portals.

Thank you for your (record) submissions
A heartfelt thank you to all those managers, investors and advisors that took the time to submit nomination bids for the forthcoming PERE Global Awards. We are incredibly excited to reveal there were almost 400 separate submissions – the most we have ever received for our annual industry awards. Next comes the incredibly difficult part: determining which four nominations to choose per category from these submissions, alongside our own outreach and research. That stage is scheduled to commence from next week, ahead of us revealing which firms and individuals were nominated on December 7. At that stage voting will begin! Voting is scheduled to close on January 8, 2021 with the results revealed on March 1.

Delivering Down Under
PGGM, the pension system for Dutch healthcare and social workers, has partnered with Charter Hall to dial up its industrial exposure. The two groups will invest A$800 million ($585 million; €494 million) in Australia, where PGGM senior director of Asia-Pacific Ronald Bausch said logistics “remains an attractive relative investment,” even as the values of e-commerce warehouses surge globally. The partnership has already accumulated seven assets with a value of up to A$300 million.