“I always took it for granted that every single tenant, because of their strength and quality, would always pay their rent. Today, every member of the team is on edge and making sure that every penny gets in and is in-line with expectations.” 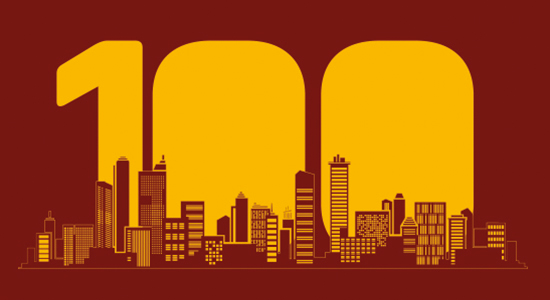 All dressed up with nowhere to go is how many firms started 2020, holding billions of dollars in capital commitments but seeing too few investment opportunities. One manager lamented to PERE the dread of explaining to investors why it took him a year to deploy just 20 percent of his $1 billion opportunity fund. However, the distress triggered by covid-19 changed the outlook for that group and many others in the just-released 2020 PERE 100 ranking nearly overnight. With nearly $500 billion raised between them, these firms have the dry powder to capitalize on what promises to be the greatest pricing dislocation since at least 2008. And, for most of them, the global financial crisis was the launch pad for the past decade of success. They will be hoping for a repeat performance this time around.

KKR sees real estate as a 16x growth opportunity. In a virtual conference last week, Scott Nuttall, co-president and co-chief operating officer of the New York firm, shared a slideshow identifying the asset class as a strategy with huge potential, second only to the 33x scalability of its long-term core investment strategy. However, scalability, in this instance is relative. For real estate, it refers to the advantage that industry leader Blackstone, with $161 billion of assets, holds over KKR, which manages just $10 billion.

Despite covid-19’s disruption of travel and hospitality, Blackstone chief executive Steve Schwarzman stands by his firm’s bets in Sin City. The New York mega-manager owns at least partial stakes in four casino resorts on the Las Vegas Strip as part of a broader live entertainment conviction. “That business is just shut right now,” Schwarzman said during a webcast for the same conference that Nuttall spoke at. “But it will open like all things, and people will go back. They tend to always go back. People like gambling.” Blackstone’s casino investments, though sufficiently hedged, are part of a greater move to institutionalize gaming real estate.

Trouble ahead for Hong Kong

By imposing national security laws in Hong Kong, Beijing has done more than threaten the city’s promised semi-autonomy. China’s move has jeopardized Hong Kong’s position as a key financial hub and compounded the double whammy of sustained pro-democracy protests and the coronavirus outbreak, which have already wreaked havoc on its real estate market. Expect international capital to demand a higher country risk premium for Hong Kong investments and for transaction volumes – already down 42 percent year over year, according to Real Capital Analytics – to continue plummeting.

PERE began an annual ranking of private real estate’s top fundraising managers in 2008 and one thing has remained constant: Blackstone has always been on top. The gap is widening. 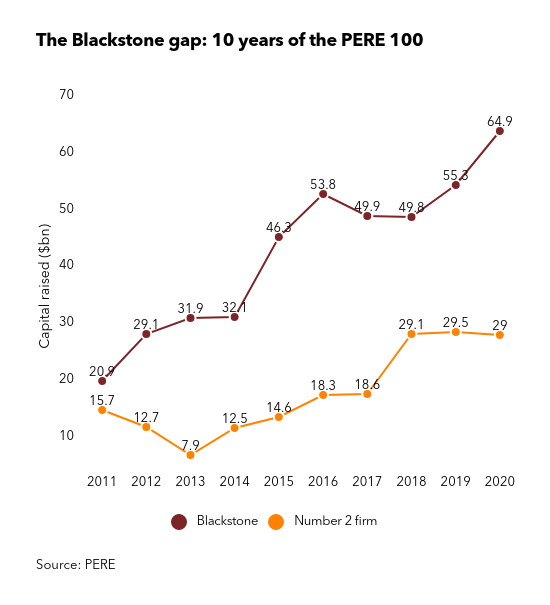 A few short months ago, seed assets were essential for recession-proof fundraising. As we found in our exploration of downturn-proof fundraising, Goldman Sachs, for one, had planned to fill out 40 percent of a $2.5 billion fund before bringing it to market. Now, such a heavily seeded portfolio would be ruinous. Amid the ongoing dislocation, transaction prices negotiated pre-pandemic are assumed to be outdated, Christie Ou finds.

A future for office?

Between the shift to remote work and safety issues that will persist as long as the virus does, the office market faces challenges in the years ahead. Advancements in flexibility are likely to play a significant role in the office market’s future, even if the current providers do not. PERE’s Arshiya Khullar is digging deep into this for our next cover story. If you are an office owner, operator, tenant or lender with insights to share, you can reach her at arshiya.k@peimedia.com.

Personnel scoop: capital advisor Evercore has hired Mark Owen as a managing director to work in its New York office. He joins from Eastdil Secured, where he spent 10 years and built a self-storage practice. Jarrett Vitulli, senior managing director of private capital markets, tells Blueprint the hire is part of Evercore’s effort to expand its niche expertise. The firm is also growing its presence abroad. In March it hired Aberdeen Standard’s Dimme Lucassen, its 10th European employee, as MD in London.

The Alaska Permanent Fund Corporation committed $200 million to Kayne Anderson’s latest vehicle: Kayne Anderson Real Estate Opportunistic Debt. The Los Angeles-based manager has already called roughly $100 million of APFC’s capital, according to a document from the sovereign wealth fund’s first quarter board of trustees meeting. APFC plans to commit $700 million to REITs by July 1, which would bring its real estate allocation to between 7.2 percent and 7.5 percent of its overall portfolio. Its target allocation is 7 percent but that is set to increase to 12 percent by 2025.

APFC’s investment is the first tracked by PERE for Real Estate Opportunistic Debt, which launched last month. In securing this commitment, the firm has picked up where it left off earlier this spring, when it launched and closed its Real Estate Debt IV fund on $1.3 billion in just two weeks.

Subscribe now and get Blueprint delivered to your inbox every week

To find out how, email peisubs@peimedia.com, or call our team: