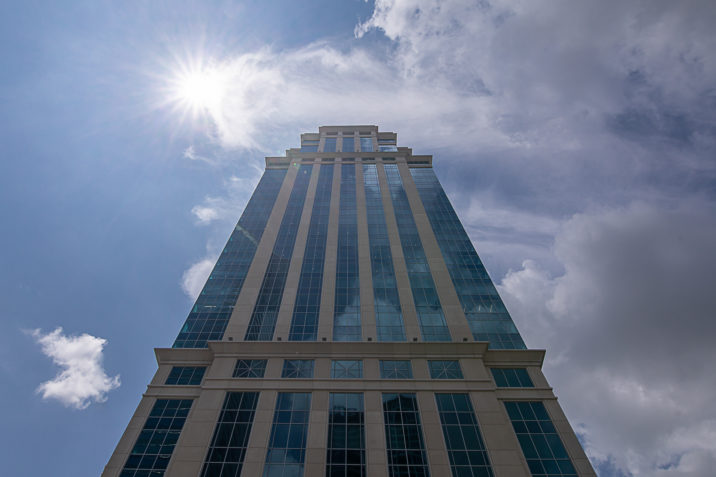 Once a headquarters for old media, the site at 620 South Tryon Street is today being rebuilt to house white-collar employees and wealthy hotel guests visiting the city. The new development – dubbed Legacy Union – broke ground in 2016 at the direction of a joint venture between investment bank Goldman Sachs and developer Lincoln Harris.

After three years, the venture has finished building one part of the development, a 33-story office tower, and has leased it to Bank of America. The partners are now in the process of selling the tower to the publicly-traded REIT Highwoods Properties for $436 million, which would be a record for the largest real estate transaction in North Carolina.

The deal further nudges the site onward from its illustrious past as home to a major newspaper, one that continues daily circulation to this day.

In the 1960s, business was booming for the Observer, a daily founded in 1886. Its fast growth meant the publication needed a new location to provide more space for its presses and growing departments needed for keeping up with a growing circulation. General manager Bill Dowd and publisher Jim Knight considered various locations at the time, in and out of the city center. But they worried that moving the newspaper to the suburbs would hurt the economy of downtown Charlotte, according to former Observer writer Jack Claiborne.

Instead, the paper succeeded in securing the block surrounding the original office that the Observer had occupied on the corner of South Tryon and West Stonewall streets since 1927, and opted to build a new and larger headquarters on that same block. Engineering and architecture firm JN Pease Associates was hired to design the new offices, which finished construction in 1972. Drawing inspiration from the Miami Herald headquarters, the building was kept just five stories tall, according to Claiborne. JN Pease Associates was an advocate of the modernist style, so the low-rise building was also largely without any lavish decoration, save for a well-maintained lawn and some landscaping.

In the 44 years the Observer spent at 600 South Tryon Street – during which it won four Pulitzer Prizes – it changed ownership several times. In 1955, it was purchased by publisher Knight Newspapers, which merged with Ridder publications to form media conglomerate Knight Ridder in 1974. Under the merged company, the Observer grew to become the fourth-largest newspaper in the chain.

In 2006, American publishing company McClatchy bought Knight Ridder for $4.5 billion. Unfortunately for the publicly-traded McClatchy and its publications, its share price peaked a year earlier and never recovered. Over the last five years, during which the company has lost 95 percent of its value, it has been reducing staff to cut costs.

When the joint venture between Goldman Sachs and Lincoln Harris paid $37.5 million for the 10-acre property from McClatchy in May 2016, the Observer vacated the premises. Today, the paper resides in the NASCAR building at 550 South Caldwell Street.

With the newspaper out, the joint venture began demolition in August 2016 to make way for the new Legacy Union mixed-use project. Lincoln Harris described the project as a gateway to uptown Charlotte. This development includes a 33-story glass office tower for anchor tenant Bank of America, which features a grand staircase and a 100-foot pyramid made of glass and steel to cap the building. Two more office towers are under construction as part of the project – one for engineering conglomerate Honeywell and another for consultant Deloitte. A luxury hotel, public plaza, retail and parking are also planned.

While the other towers are still in development, the Bank of America tower – which welcomed employees in early August – has come under the hammer. In late August, Highwoods Properties announced it would purchase the 90 percent leased office for $436 million from Goldman Sachs and Lincoln Harris.

The days of producing newspapers at the site at 620 South Tryon Street are well and truly done, replaced with comparably more profitable occupations – at least that is what the publicly-traded REIT is betting.